My wife Karen has dreamed of celebrating a milestone birthday in Tuscany since her 20’s.  We hoped to go to chef Umberto Menghi’s cooking school in Tuscany for her 40th, but family and finances did not allow for it.  So we were determined to get to Italy for her 50th.  We found good flights with Air Canada, with only one stop between our home in Victoria and Rome.  We reserved a convertible that we would pick up at the airport in Rome, and even found a luxury boutique hotel in Rome with free parking where we would spend our first night.  To find our Tuscan villa, we looked through the listings at Invitation to Tuscany, To Tuscany, and Friends of Tuscany, as well as VRBO listings.  We were so overwhelmed with the selection that we created a table and ranked each property based on our criteria: 2 bedrooms and bathrooms, a good kitchen, a good view, walking distance to a village, swimming pool, and central location in Tuscany.  We finally settled on Casa Allioni through Invitation to Tuscany.

Our trip started badly.  Despite checking in on our smartphones earlier in the day, we arrived at the airport and were told that our flight to Toronto had been cancelled due to maintenance issues.  There was no way to make our connecting flight to Rome.  We were devastated.  We would lose an entire day in Italy.  The food tour we had booked for our first night in Rome, and tickets for the Galleria Borghese the next morning, would not be enjoyed.  Even worse, despite a call to Avis to advise of our late arrival, they did not hold our convertible and there were none available for rent anywhere between Rome and Florence.

We arrived in Rome the next morning exhausted and drove straight to our villa (not in a convertible!), arriving two hours before check in, but Beverly the owner was gracious enough to let us in early.  The disappointments of the previous day melted away as I explored our villa and the surrounding vineyards and olive grove.  A few hours later our dear friends Chris and Arleen arrived.  They had accepted our invitation to celebrate Karen’s birthday with us in Tuscany.  The villa was perfect for us, with a bedroom and bathroom on each floor.

Our week in the villa had a wonderful tension between wanting to go out and explore Tuscany, versus staying in the villa and relaxing with a book under the Tuscan sun.  Karen and I, on most days, would leave the villa in mid-morning to explore the region, and return in the late afternoon to enjoy a bottle of wine and the incredible sunsets that enveloped us in brilliant hues of yellow, orange and red.  The Tuscan sun really is a thing.

Sunday was our first full day. Karen and I explored some of the nearby towns, including the walled hill town Civitella in Val Di Chiani.  Civitella has been inhabited since Roman times, was fortified by the Lombards in the 6th century, and is one of the best preserved of the network of Lombard fortresses built in central Italy.  On June 29, 1944, 204 civilians were massacred in the town by the Nazi’s in retaliation for the killing of two German soldiers.  The Castle, erected in 1048, was used as a headquarters by the German army and was mostly destroyed by allied bombing in 1944.

After lunch we returned to the villa for a private cooking lesson with Fabrizio, who taught us how to make ravioli, chicken cacciatore and cantucci.  It was informative, entertaining, and delicious.

Monday was a full day of exploring the beautiful Val d’Orcia, a UNESCO World Heritage Site, and its most famous hill towns, Montepulciano, Pienza and Montalcino.  Montepulciano was probably our favourite of the three, with great shops lining its narrow streets and expansive views from its hilltop location. We enjoyed a tasting of Rosso de Montepulciano and Vino Nobile de Montepulciano wines. Pienza, where we tasted its famous Pecorino cheese, was also very charming. Montalcino, while not our favourite of the three towns, was still a treat to explore and its famous Brunello wine is likely the finest red wine in Italy. 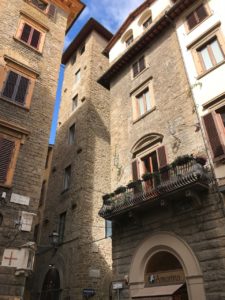 Tuesday was the big day (Karen’s birthday), and it was a big day.  We woke early to drive to Montevarchi where we caught a high-speed train into Florence.  We met our guide Giulia near the station and began our walking tour of Florence, starting with Michelangelo’s David.  Most tourists were in a 2-hour line that circled the building, but Giulia had us inside the museum in less than 5 minutes!

Karen and I had been to Florence 26 years ago, and it was fun to see its famous landmarks again, although the size of the crowds for that time of year was shocking.  After the walking tour, and a delicious birthday lunch with Chris and Arleen, Karen and I eventually made our way to the highest point in Florence, the Basilica of San Miniato al Monte, where we met our Flytographer, Alberto, for a 50th birthday photoshoot. 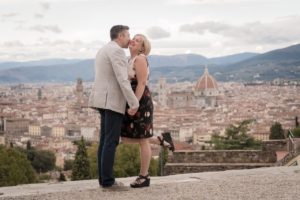 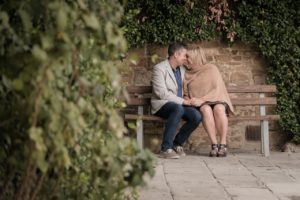 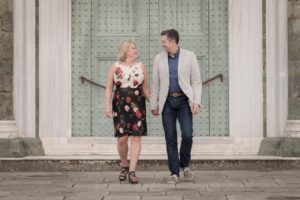 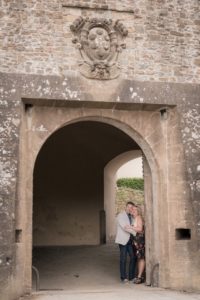 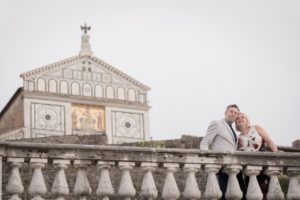 Our photoshoot was followed by a great dinner at Caffe dell’oro, a Michelin starred restaurant near the Ponte Vecchio, then a romantic stroll through Florence’s narrow streets to the train station.

After two full days of touring, we were happy for a down day.  We spent Wednesday afternoon in Arezzo, the closest city to our villa.  Arezzo is hugely underrated.   It has great shopping, restaurants and historic sites, including the remains of a Roman amphitheater.  Arezzo is famous for the early renaissance frescoes by Piero della Francesca.  That night we fired up our villa’s huge, ancient bread oven and enjoyed pizzas made by Chris, al fresco.

On Thursday we had the pleasure of visiting with Canadian/British television personality Debbie Travis at her magnificent Tuscan retreat, Villa Reniella.  Karen had interviewed Debbie years ago when she was in our city to speak at a home show.  Debbie gave us a tour of the property and an update on what she is up to these days.

We then had one of those amazing small world moments when we met Kelvin and David for lunch in Siena.  Kelvin is one of the lawyers in my firm and they happened to be in Italy at the same time as us.

By Friday Karen was upset that we had not yet been to a farmer’s market, so we found a listing online and drove to a nearby town that had a Friday market day.  We then savoured our last afternoon at Casa Allioni.  I went for one last walk into the village before reading by the pool, and Karen enjoyed time in the kitchen making a delicious dinner with what we picked up that morning at the market.

Our week at the villa ended too soon.  We both wished we would have had more time to enjoy less doing and more being. Thankfully it was not quite the end of our vacation.  From Casa Allioni we drove to Capalbio, an incredibly charming medieval hill town on the southern edge of Tuscany, just minutes from the Mediterranean Sea.  After checking into the Valle del Buttero Hotel,  we walked into town for lunch at Trattoria Da Carla, which had amazing views over the town’s ramparts towards the sea.  After a few hours at the pool, we walked back into town for dinner, observing la passeggiata, the social ritual performed throughout the country when Italians step out before dinner to see and be seen.  After dinner we enjoyed wandering the narrow streets. 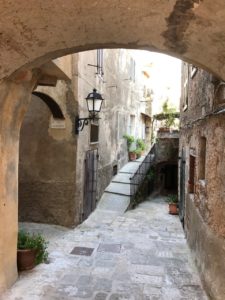 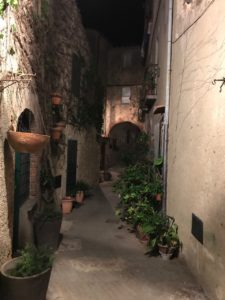 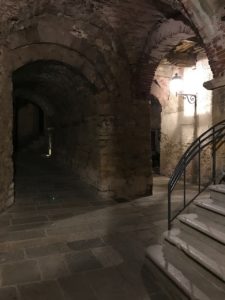 All roads lead to Rome, where we spent our final night in Italy.  We drove to the Hotel Villa Pinciana, an art nouveau (liberty style) palazzo built in the early 1900’s and now a boutique hotel with free parking within its beautiful walled garden.  It is located in a quiet area of grand buildings occupied by embassies and government ministries, within easy walking distance of the Spanish Steps, Trevi Fountain and Villa Borghese.

We walked to the Villa Borghese where we had lunch, then to the Spanish Steps and back to the hotel.  After “appy’ hour on the hotel’s roof we walked to Trastevere for dinner, passing the Piazza Barberini, Trevi Fountain, Pantheon and ruins of Largo di Torre Argentina.

The hotel served a great breakfast, including of course, a great cappuccino. Driving through downtown Rome to the airport during rush hour, circling the Coliseum and passing other landmarks, was actually quite fun. We are now longing to return.  With its food, wine, history and culture, not to mention friendly people, Italy just might be our new favourite country to visit.

Tip: the rental car company provided us with a GlocalMe, a pocket-sized mobile wifi device that gave us free wifi wherever we drove or walked.  Unless you have a great roaming plan, I highly recommend it.

4 thoughts on “A Villa in Tuscany”